Posted on August 27, 2012 by erinmchughwrites

When I’m in New York City, buying local can be a little more of a chore. In the summer I get my tomatoes and other vegetables from Louis, and purposefully make the half-mile trek instead of going to the grocery chain on the corner.

But I’m on vacation this week in my hometown in Massachusetts, so I’m trying doubly hard. These are my people! One of the first things I like to do upon arrival is get fresh flowers, but oddly, they’re a little hard to come by. There’s a stand I like especially that’s on the way to the beach, but you have to remember to get there early and pre-arm your car’s cupholder with your own glass of water. I forgot to do that the other day, and there was only one bunch remaining when I stopped to talk to Thaddeus, who was manning the stand. I only had a $20 bill, and the flowers were $6. Thaddeus didn’t have enough change, and suggested I buy $14 of zucchini and summer squash. Good businessman, considering he was about nine. I demurred.

Next, I set off for the once-a-week farmers market in my village, and bought, frankly, some less-than-stellar tomatoes. But now I had change, and so I got back in the car to revisit Thaddeus. Only about twelve minutes had passed, but naturally, the last flowers were gone. “Come back around 8:30 tomorrow morning,” my friend urged, very serious. I told him I would, and I did, though evidently he had the morning off and his station had returned to the honor stand it always had been. I was sad — not because I wanted to get the credit for coming back instead of going to the stand 500 yards down the road, but because I wanted a kid to see that grown-ups keep their promises.

As to local ice cream purchases, well, on that I’ve fallen off a little. I have been trying my damnedest to visit two local purveyors per day, but yesterday, due to overeating a lot of local pancakes and pizza, I cut down to one stop. So today, I will pay the piper by traveling to an entire other state to get the homemade lemon ice cream I adore — a mere 37-mile round trip. Of course, I realize that makes it their local, not mine, but still… 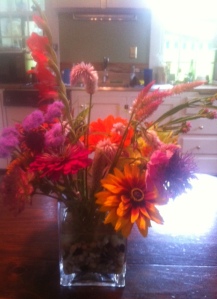 Put your money where your friends are.